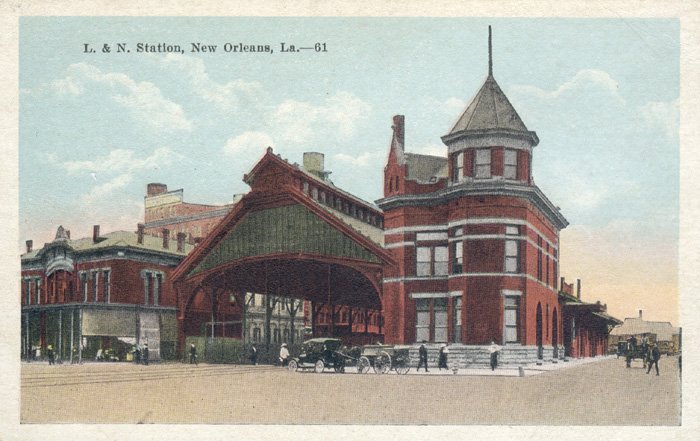 The old Louisville and Nashville passenger terminal on Canal Street.

TL;DR – check out my home page for bios and more info about me.

My oldest account on Da Twittah is @YatPundit. I created it in 2007. My interest in the platform began with the notion of improving the use of SMS communication. Early on, Twitter embraced SMS. So, you tweeted via text. That evolved over time. As we entered the 2008 presidential primary season, a friend messaged me, fussing about how I post too much politics. It distracted them from the foodie posts. That’s when I created the foodie account. It sort of grew from there.

Here’s a run-down of my Twitter follows multiple personalities:

@YatPundit – where it all started. It was my omnibus account for years. Since November, 2016, the feed is more politics, and I try to not let that bleed over into the other personalities. Follow @YatPundit for, well, for lots of reasons.

@YatCuisine – I love talking about foodie subjects, dining out, #foodporn, cooking, recipes, etc. I’m not alone. Sometimes, even when you’re pretty much in sync with others politically, they don’t get into it as much. So, I shifted the food talk to this account. Sometimes I forget and RT non-food here, but overall, It’s worked for years. Follow @YatCuisine if you’re a foodie.

@NOLAHistoryGuy – Originally created to support my history books and speaking gigs, this account took a turn a couple of months ago. As much as I like wading into the mud on @YatPundit, I found that I was losing touch with #NOLAtwitter. While @NOLAHistoryGuy was always focused on the books, history pics and articles, I wanted to re-connect. So, now this account is a “hyperlocal” New Orleans feed. Sometimes it will be politics (ICE in New Orleans, mayor/city council, etc.), sometimes foodie conversations, sometimes Da Saints and Da Pels. It’s how I connect locally now.

@YatMedia – This account was more active when YatMedia was more of a thing as a business. Since my Unfortunate Business Divorce in 2012, @YatMedia isn’t as active as it once was. When critiquing social media involves saying more than “Twitter is a sewer,” I’m sure it will come back.

@YatSoccer – primarily for me to live-tweet #USMNT, #USWNT, and Arsenal matches.

@PontchartrainRR – my railfan and model railroading feed. I like to watch trains, take pics of them, and share railroad history. I also operate a small model railroad in N Scale at home.

There are a few other accounts I’m associated with, for special projects and such. If you follow @YatPundit, you’ll see those pop up in the feed.