Two brews on tap today, both local, but hopefully not too bitter. Mr. Tim Morris of T-P/NOLA.com wrote an interesting piece discussing party buses and school zones, raising concerns about how Mayor Cantrell is treating some of her constituents.

Our first tap in the pub talks about the party buses. So, hese are those converted school buses you see downtown. So, they have loud sound systems. They flash lots of disco-style lighting inside. Groups charter the party buses. Party-goers load them up with a few ice chests of beer and wine (and possibly some of Lady Goddess’ Own Herb).

Now, the problem with these buses is compliance. They’re not legal on many counts. Buses lack CPNC certificates. Electric lights don’t meet code. Cantrell ordered them to get compliant. They didn’t. She extended the time period.

I also mention a bit about the “curmudgeon class” on Da Twittah. When I do, let’s be clear, I’m not talking about Tim Morris and his colleagues at Da Paper! 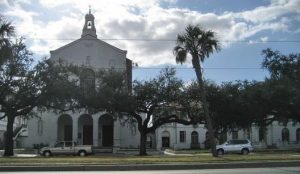 St. Anthony of Padua on Canal Street, sight of a traffic-cam school zone

So, contrast that with the treatment some drivers in the city received in the last two weeks. The mayor’s office made a significant change in school zone enforcement.

Traditionally, we enforce school zone speed limits with a traffic cop out with a radar gun. You go over the speed limit, you’re breaking the law and could get a ticket. The cop would usually spot you five miles. So, if you’re going, say 23 in a 20, they’d let you slide.

Now that the traffic cameras and street-installed rollovers detect your speed and document who you are, things are quite precise and less human.

It’s still possible to toss out the violations that are less than 5 miles over the speed limit. Cantrell’s decided go zero-tolerance. Morris argues in his column that this is unfair. Like the business owners, drivers deserved fair warning.

I’m at the point with this where safety trumps whinging drivers. I discuss.