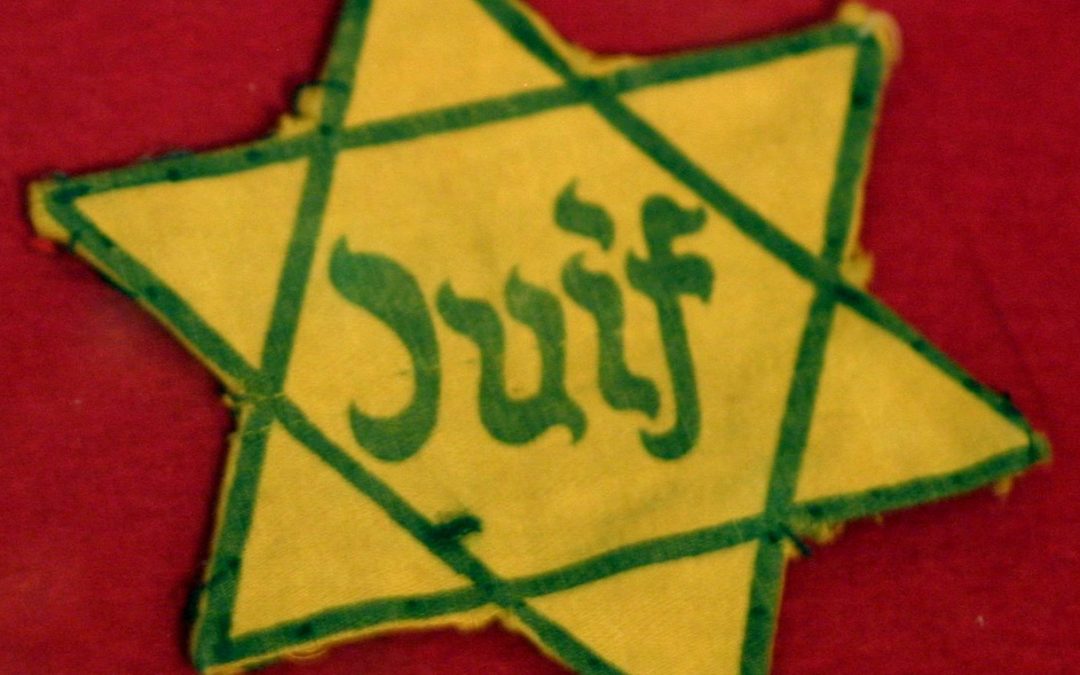 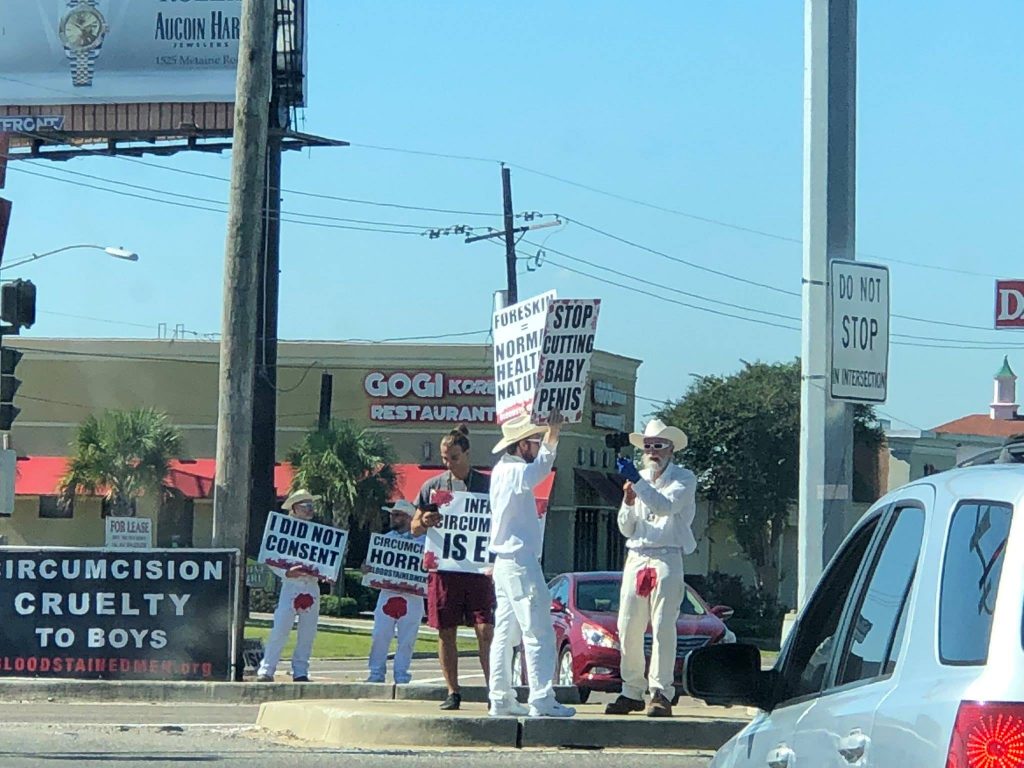 There are a number of issues in our body politic that have origins in discrimination against Jews. While there are many reasons for ignorance on these, I’m still concerned. Therefore, it’s important to take a moment and talk about things that have their roots in hatred of Jews.

There was a protest against circumcision in my neighborhood (#themetrys) yesterday. I know a number of people who do not approve of circumcision. While their numbers are few, they make a solid case for not doing this to their infant sons. I respect that.

What I don’t respect is a group of men protesting this issue in public within days of a massacre of Jews. The Jewish people are the one single group in the world immediately connected to circumcision. Did those men standing on Clearview and Veterans in Metairie yesterday consider this when protesting this procedure? It’s unclear. It’s unclear because they did it in the wake of the massacre of Jews in Pittsburgh over the weekend.

I saw the photos of this protest tweeted by a friend around mid-afternoon yesterday. My first reaction was, this is way too tone deaf. No legitimate group looking to promote an idea or issue could possibly be this unaware of the world around them. So, my process took the next step. Clearly these people were organized. They had to know what happened Saturday. They had to know those people in Pittsburgh were gunned down at a bris, of all events. Therefore, there was a good chance the protesters were antisemitic.

I said as much on Zuckerbook. Read the responses. A number of people know the group and its agenda. They claimed the protesters are not antisemitic. Commenters presented logical reasons for their beliefs.

My concern continued. These people have a website. They’re literally “on tour” with these protests. Zuckerfriends reported seeing them in Shreveport, Galveston, and Baton Rouge, before their appearance in Metairie. That level of commitment requires logistics. It requires communication.

So, now I’m even more skeptical. They’re not operating in a vacuum. A group concerned about the bigger issues would stand down, out of respect for others who disagree with them. This group didn’t. Are they ignorant, or do they have an an additional agenda? 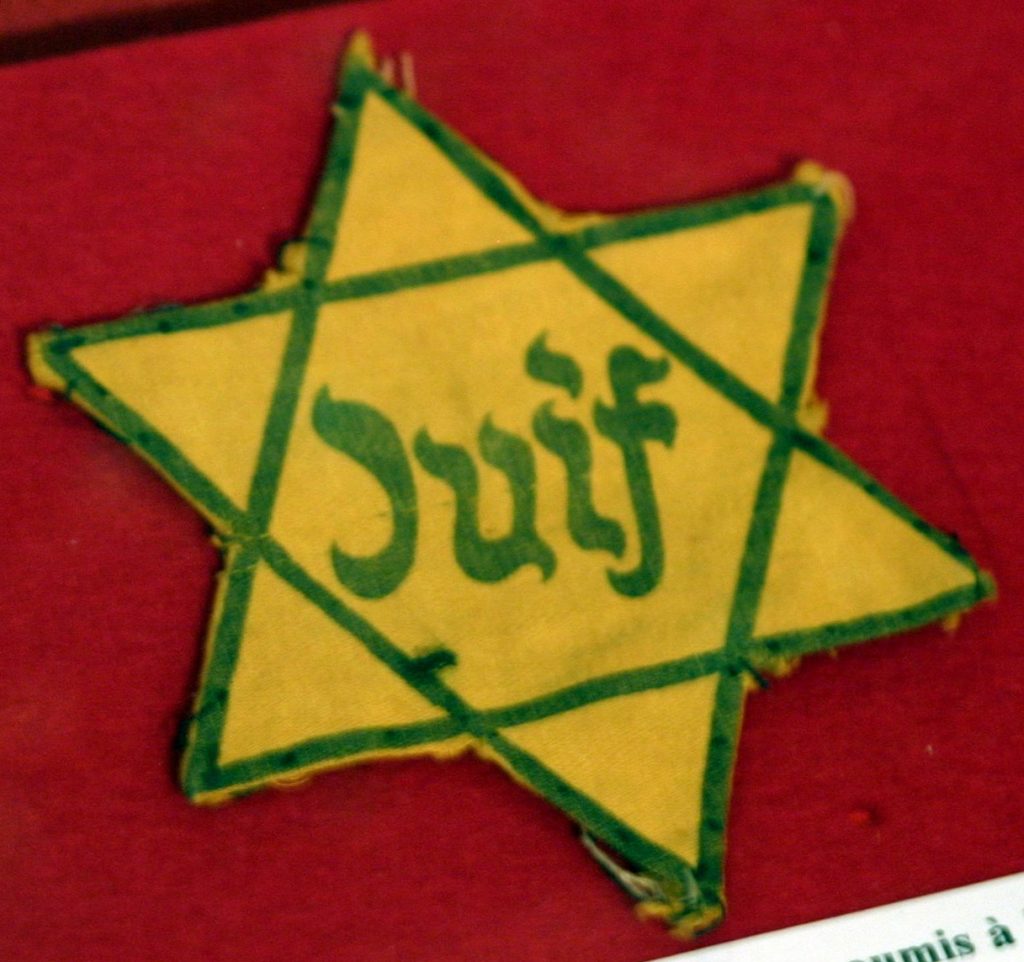 Pogroms in Russia. Turned away from the United States. Hitler and Himmler. These are but examples of discrimination and hate focused on Jews.

Hitler served in the German Imperial Army in World War I. The Treaty of Versailles ended that war. That accord dealt harsh terms and conditions to Germany. Those terms included demands for reparations that were unreasonable. Like many at the time, Hitler was hurt and angry and defeated. He channeled that anger not towards the British or the French, but towards German Jews.

Hitler believed the Jews came out of World War I way too nicely, while Christian Germans suffered. This is a common theme going back millennia.  Shakespeare created “Shylock, a Jew”, as his bad guy for The Merchant of Venice. That didn’t happen in a vacuum.

The Tsars treated their serfs badly for centuries. To make Christian serfs feel better about their lot in life, the Tsars and the Church focused the anger of the serfs on the Jews. Blood libel and profiting from Christians were two examples of “crimes” of the Jews. The Tsars allowed Christians to carry out “pogroms” against Jews. Thousands of Jews were displaced, turned out of Russian cities. Jews were attacked, injured, and killed.

Have you ever watched Fiddler on the Roof? Go back, now that you know what a pogrom is.

One of the common tropes of the 20th and 21st centuries with respect to Jews relates to circumcision. Groups spreading hatred of Jews claim there is a conspiracy involving Jewish doctors to mutilate Christians. This goes back long before the Nazis. That regime used this accusation as one of many to deny Jews civil rights in Germany between the World Wars.

Read. Learn. Understand. Do you have Jewish friends? Ask them why they circumcise their children. Do you think they’re part of an international conspiracy? Do you believe they should be shot down in their places of worship? Take a step back. Look at the entire picture.