Putting down a Slave Revolt in Baton Rouge 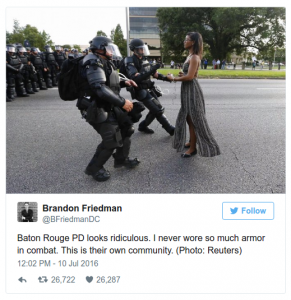 How to stop a slave revolt

Peaceful assembly happens every day in the United States, whether it’s you and your friends meeting for lunch. Maybe you’re gathering for Sunday services at your church. In Baton Rouge, it could be an LSU football game at Tiger Stadium. What you don’t see at those peaceful assemblies are police in armored suits that look ridiculous to even veterans of modern combat. The cops turned out to face black members of the community as if they were stopping a slave revolt.

What’s the difference? Your friends at lunch or your congregation at church aren’t considered a “threat”.Neither are the fans who gather on LSU’s campus for football games. What made protests over the weekend in Baton Rouge a “threat”?

BRPD and the EBR Sheriff’s Office understand crowd control. They participate in major crowd control exercises at those LSU games. Those crowds are quite different, in that they’re overwhelmingly white. What we saw in Baton Rouge wasn’t crowd control. It was the suppression of what BRPD perceived as a slave revolt. What happened in Dallas was the work of a madman. BRPD approached their city’s problems as white-cops-versus-unruly-blacks. They plead the excuse that the crowd was violent:

Baton Rouge’s display of military-grade equipment followed last week’s fatal shooting of Alton Sterling as two Baton Rouge police officers tried to arrest him. Protests there turned violent over the weekend; the Baton Rouge Police Department said that one officer’s teeth were knocked out and that a number of firearms were confiscated during one of the rallies

The Baton Rouge Police Department did. Did the protesters intend to be violent from the start? Would they have thrown objects at the cops had BRPD taken a less-aggressive stance? Did the cops need to turn against members of their own community? The catch is that BRPD doesn’t consider black folks part of the community. They saw this reaction to them committing homicide as a slave revolt.

The Washington Post runs down, and yet again, how the feds offer military surplus weapons and equipment at deeply-discounted prices to local police. BRPD clearly has taken advantage of these programs to produce their own little badly-trained militia.

Alton Sterling was killed by a BRPD officer. The department new there would be outrage in the community. Still, they decided to go to war in full military gear. This follows a pattern of racism and poor policing by the department over a period of years. Now that racism is stoked by an incredible amount of military-grade hardware, like we saw in the aftermath of the Michael Brown shooting in Ferguson, MO:

One image from the weekend shows two Baton Rouge SWAT officers armed with semiautomatic carbines affixed with close-quarter optics. One officer has two 30-round magazines clipped together so that, if needed, he can reload faster. The officer is wearing a tactical-style, low-profile helmet with a night-vision boom attached — although it is missing the actual night-vision device.

Ridiculous. It’s clear that what happened in the Alton Sterling homicide was shoddy police work. Furthermore, their behavior is arguably criminal. From the beginning of the confrontation, all the way through terrible handling of witnesses and evidence after the cops killed Sterling. BRPD’s response to their own poor performance is to take the attitude that the blacks need to be put in their place.